Another important aspect of SPT is the concept of self‐disclosure. It passes through many phases as an interpersonal relationship progresses from least intimate to most intimate (Taylor & Altman, 1987). These stages are 1) orientation 2) exploratory affective exchange 3) affective exchange 4) stable exchange.

Affective exchange: In this stage, the more intermediate layers are shared, and interactions are increasingly casual.

Stable exchange: The main aspects of this stage are openness, breadth, and depth across conversation topics. Some important characteristics of this stage are honesty, intimacy, and open expression of thoughts, feelings, and behaviors.

This theory also explains social depenetration, which happens when self‐disclosure is reduced because of interpersonal conflict and relational stressors (Taylor & Altman, 1987). Social depenetration is the deliberate hiding of some portions of a person’s life to another person. 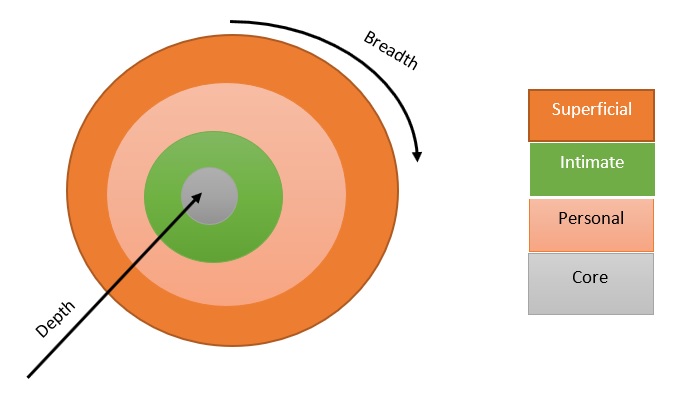 Osatuyi, B. (2015). Is lurking an anxiety-masking strategy on social media sites? The effects of lurking and computer anxiety on explaining information privacy concern on social media platforms. Computers in Human Behavior, 49, 324-332

Utz, S. (2015). The function of self-disclosure on social network sites: Not only intimate, but also positive and entertaining self-disclosures increase the feeling of connection. Computers in Human Behavior, 45, 1-10.