Critical Realism (CR) is a philosophy of science that is based around a number of ontological principles. Epistemologically, CR provides principles that can be applied by researchers developing theoretical explanations about phenomena in the world. It therefore functions at a level similar to that occupied by such philosophies as Positivism and Interpretivism. Because CR principles are usually used to underpin the development of theoretical explanations it is more accurately considered a "metatheory", rather than a "theory".

CR does not have "Dependent" or "Independent" constructs, per se. The ontological model of CR is described below.

CR does not have "Dependent" or "Independent" constructs, per se. The ontological model of CR is described below.

Critical realism holds that the theory of knowledge, or epistemology, is different form a theory of being, or ontology. There is a reality which exists independent of its human conception. Critical realists believe that there are unobservable events which cause the observable ones; as such, the social world can be understood only if people understand the structures that generate such unobservable events. This is important in the experimental context, because it allows the scientist to distinguish between the event and what causes it. According to this theory, an individual conducting an experiment creates the conditions necessary for the experiment (observable event), but the results are caused by the underlying laws and mechanisms (unobservable events). The critical side of this theory arises from the identification of epistemic fallacy – the idea of analyzing ontological statements in terms of epistemological statements. Epistemic fallacy is caused by a failure to recognize a difference between ontology and epistemology. The realism side of the theory focuses on the existence of real mechanisms which shape events.

“A central idea of CR is that natural and social reality should be understood as an open stratified system of objects with causal powers” (Morton, 2006). There are three strata, according to the theory: domains of real, actual, and empirical. Domains of empirical include observable experiences. Domain of actual includes actual events which have been generated by mechanisms. Finally, the domain of real includes the mechanisms that have generated the actual events.

The critical realism theory can be applied to social science as well as natural science. However the applications of this theory in social science are different from the natural. Culture and society are generated by human activities; so society is continuously changing due to the dynamic nature of human actions. As such, there is a mutually influential relationship where humans shape the society, which in its turn affects human activities. Unlike natural laws, rules of culture and society are not universal but applicable only in a certain location and time. Furthermore, social structures are open and cannot be artificially controlled in a laboratory type setting. Therefore the critical realism theory does not have any predictive power, and the theory is used for its explanatory benefits only. Critical theory requires a deep understanding of any social situation, going beyond the observable and investigating the mechanisms behind any event. The focus of the theory is on ex-post explanations, as opposed to ex-ante predictions. As such the major application of this theory in research is explaining the complex social events and ruling out any other potential explanations. In information systems, critical realist theory primarily can be used to study how information is used by organizations and measure the perceived net benefits from using an information system. 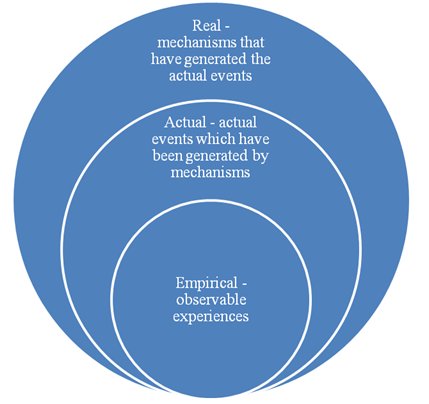 Recreated from Mingers and Willcocks (2004)

Bhaskar, R.(1998) The possibility of naturalism: a philosophical critique of the contemporary human sciences, Routledge, London (1998).