Difference between revisions of "Activity Theory"

Activity theory or Cultural-historical activity theory (CHAT) is a theoretical framework that helps to comprehend and analyse the interaction between the human mind, comprising of individuals’ thoughts and feelings, and their and activity.[1] L. S. Vygotsky and Aleksei N. Leontiev are regarded as the founders of the cultural-historical school of Russian psychology and the developers of this theory. CHAT has also been defined as a cross-disciplinary theory for understanding how individuals actively modify their natural and social reality, including themselves, as an ongoing culturally and historically situated, materially and socially mediated process,” according to its definition.[2]

The core tenets of activity theory are - first, humans act collectively, learn by doing, and communicate through their actions. Second, humans create, employ, and adapt a variety of tools to learn and communicate. Lastly, one’s community is central to the process of making and interpreting meaning – and subsequently to all forms of learning, communicating, and acting.[3]

Three principal stages or generations of activity theory have been identified. The first generation is characterised by Vygotsky’s theory of cultural mediation, which was developed in response to behaviourism’s explanation of consciousness, or the formation of the human mind, which reduced the mind to a series of atomic components or structures linked largely with the brain as “stimulus-response” (S-R) processes.[4] Vygotsky contended that the connection between a human subject and an article is never direct and that rather than exploring the human brain or the individual mind, it should be looked for in society and culture as they evolve.  Thus, his cultural-historical psychology endeavoured to account for the social origins of language and thinking. Vygotsky contended that consciousness is essentially subjective and shaped by the history of each individual’s social and cultural experience. The unit of analysis of the Vygotskyan framework is principally the individual.

Vygotsky defined practical human action as the general explanatory category in human psychology, however, he did not clarify its precise nature. Later, the unit of analysis was expanded to incorporate collective motivated activity toward an object in the second generation, moving beyond Vygotsky’s individually-focused model to A.N. Leontiev’s collective model, allowing for a better understanding of how social groups mediate activity.[5] As a result, community, regulations, division of labour, and the importance of understanding their interactions with one another are all included.[6] The analysis of the collective activity system covers social, psychological, cultural, and institutional viewpoints. In this conception, activity systems are inextricably linked to a culture’s deep-seated material practises and socioeconomic institutions. Vygotsky’s previous, simpler triadic model could not adequately account for these sociocultural elements. Thought and cognition, in Leontiev’s view, should be regarded as a part of social life - as a part of the means of production and social relations systems as well as the intentions of individuals in certain social situations.

When activity theory ‘went international’ after Vygotsky’s foundational work on the individual’s higher psychological functions and Leontiev’s extension of these insights to collective activity systems, questions of diversity and dialogue between different traditions or perspectives became increasingly serious challenges. In the 1970s and 1980s, Michael Cole and Yrjö Engeström’s work brought activity theory to a much larger international audience.[7]

Engeström contended that after taking into account all of the participants’ lives and biographies, as well as the history of the larger community, multiple activity systems must be considered, implying the need for a 'third generation' to “develop conceptual tools to understand dialogue, multiple perspectives, and networks of interacting activity Systems,”. A noticeable advantage of second and third-generation CHAT over its earlier Vygotskian ancestor, which concentrated on mediated activity in relative isolation, is the bigger canvas of active persons (and researchers) enmeshed in organisational, political, and discursive practises.[8]

Third-generation activity theory is the application of Activity Systems Analysis (ASA) in developmental research, which is characterised by investigators taking a participatory and interventionist role in the participants’ activities and changing their experiences. Engeström’s activity triangle diagram – which includes rules/norms, intersubjective community relations, and division of labour, as well as multiple activity systems sharing an object – has become the widely used third-generation model for analysing individuals and groups in the research community. 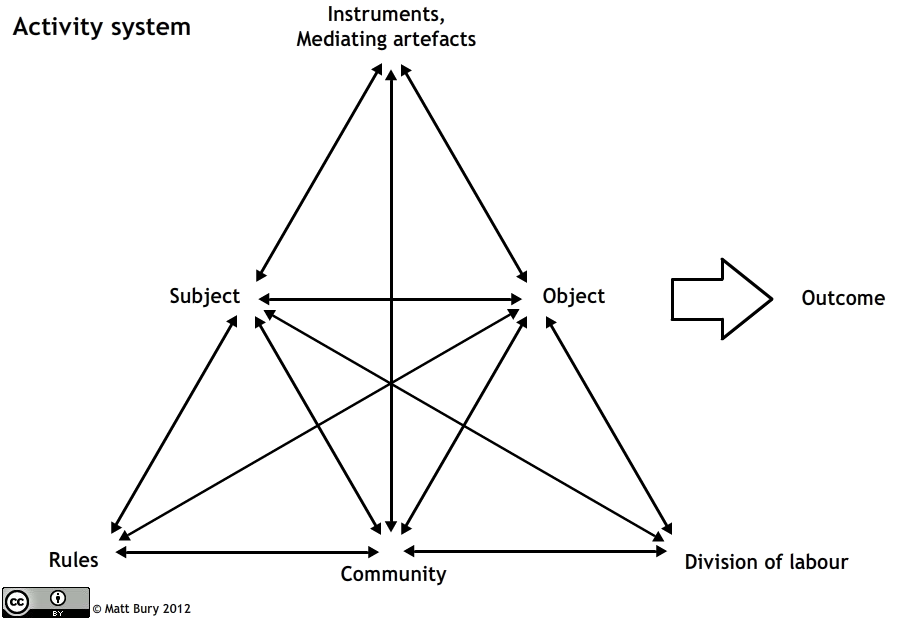 Allen, D.K., Brown, A., Karanasios, S., & Norman, A. (2013). How should technology-mediated organizational change be explained? A comparison of the contributions of critical realism and activity theory. MIS Quarterly, 37 (3), 835–854

Crawford, K. & Hasan, H. (2006) Demonstrations of the Activity Theory framework for Research in IS. Australasian Journal of Information Systems, 13(2), 49–68.

Simeonova, B. (2018). Transactive memory systems and web 2.0 in knowledge sharing: A conceptual model based on activity theory and critical realism. Information Systems Journal, 28(4), 592-611.